In December 2017, Architectural Digest published an article listing the most beautiful Airbnbs in every state. For North Dakota, that Airbnb was in Fargo.

Photos by Hillary Ehlen
Before photos provided by Rachael Steenholdt

In December 2017, Architectural Digest published an article listing the most beautiful Airbnbs in every state. For North Dakota, that Airbnb was in Fargo. We caught up with Airbnb host Rachael Steenholdt for a private tour of her charming home that she has chosen to share with the world.

A Little Bit About Airbnb

For those of you who may be unfamiliar, Airbnb is a hospitality service that allows people to lease or rent short-term lodging. Staying in an Airbnb is like staying in a hotel, except that your room may be in a house or an apartment. Some hosts even offer the ability to rent out an entire house.

Originally from the Twin Cities, Rachael and Mikala Steenholdt are identical twins who are the proud owners of the prettiest Airbnb in North Dakota. Yes, you heard that right–they are identical twins from the Twin Cities. For their full-time jobs, Rachael Steenholdt is a public defender, while Mikala Steenholdt is a federal prosecutor. Unfortunately, the two are unlikely to ever go up against each other in court. That’s the kind of thing that only happens on Television, right?

The sisters came to Fargo to pursue their careers and fell for an older home, which they purchased in 2015 and promptly began fixing it up. Rachael Steenholdt told us how they came to be Airbnb hosts: “It was sold as a single family home and had this mother-in-law unit. Since we’re by the hospital and we know a lot of traveling nurses, the idea was just to rent that out, which we did. Then we were in between traveling nurses for about a month–we’d traveled on Airbnb before, but never hosted–so we tried that and it was just crazy.” Then last year Mikala Steenholdt moved down to Iowa for work and Rachael Steenholdt started thinking about renting out the main house. “My sister moved away, and it’s a big place for just me and Walter (Rachael Steenholdt’s St. Bernard) to hang out,” she said.

Today, Airbnb travelers are able to rent out both the main house and the mother-in-law unit, or one or the other as they are listed separately on the website. One thing that sets these spaces apart from a hotel is that they are pet-friendly with a fenced-in yard. “You truly get the home experience when you bring your pet. I think we get a fair amount of guests just because we allow pets,” Rachael Steenholdt said. When you first walk up to this home, you are welcomed by a gracious front porch. Inside you will see a staircase to your right and a living room to your left. Edwardian woodwork is remarkably well preserved as the previous homeowners must have kindly fought the urge to paint over it. Before moving in, the sisters had the original hardwood floors refinished and later installed new tile in the entryway.

The living and dining rooms are two of the spaces that required the least amount of work. Most of the furniture was thrifted, and most of the artwork was actually made by Rachael Steenholdt, including a bulldog painting and framed photos of Fargo landmarks. On the coffee table, she displays local magazines for guests who want to familiarize themselves with the FM area. In the corner of the dining room is a doorway that leads to the mother-in-law unit, which has been soundproofed and temporarily closed off from the main house. “The idea was if and when we sell it, the future owner can always just open this up and turn it back into a single family home,” Rachael Steenholdt explained. 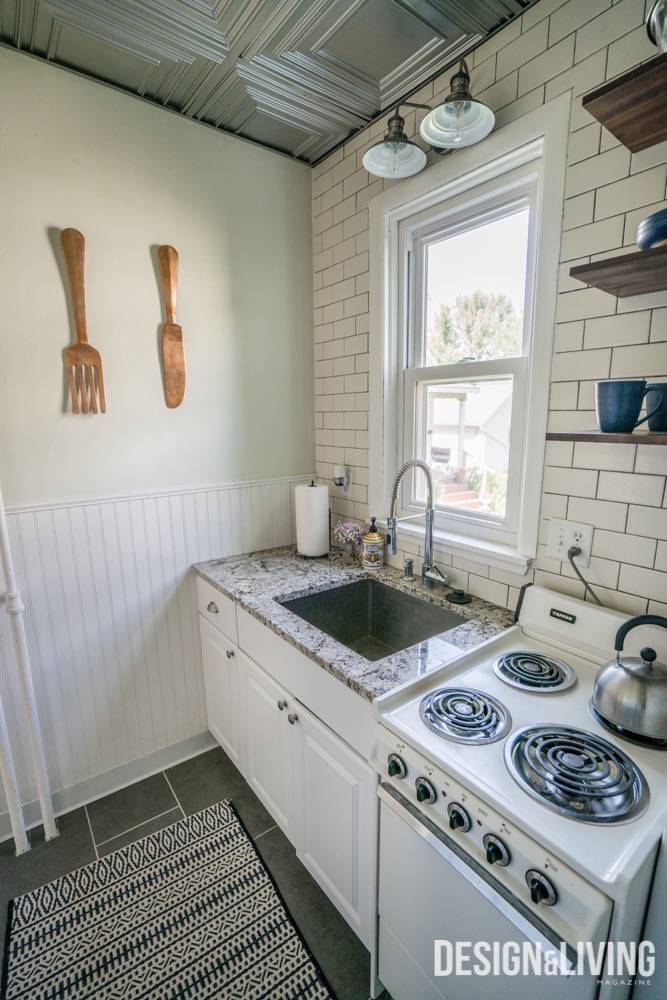 The kitchen underwent a major renovation this spring. However, the Architectural Digest article came out even before then. “Everybody thought we were nuts because there were a lot of renovations that needed to be done, so it was a pretty cool thing to have that recognition. I had no idea it was coming. My co-worker actually showed it to me,” she laughed.

The kitchen reno included new cabinets, countertops, flooring and a new passthrough from the kitchen to the entryway, which hadn’t existed before but makes a lot of sense now. The mobile island was also a new addition. On one side of the space, Rachael Steenholdt displays a mix of local products and hand-me-downs from the sisters’ grandmother, who happens to live nearby, on exposed shelves. “Everything means something. I didn’t fill the space just to fill the space,” she said. Upstairs are three bedrooms, a laundry room and two bathrooms. In the bedrooms, the two Steenholdts updated the carpet and added a fresh coat of paint to the walls. They also renovated the guest bathroom, while the master bath looks as if it hasn’t been altered since the 1930s and is still in pristine condition. The master bedroom used to have its own entrance, which the sisters have converted into a balcony. “As I understand it, this home used to be a triplex at one point,” Rachael Steenholdt explained. One other big update that the sisters made was adding air conditioning to the home. The mother-in-law unit has its own porch and entrance. Inside is a little living room, kitchen, bedroom, bathroom and breakfast bar, which the sisters have also extensively renovated. Our favorite piece of furniture in this space is the green midcentury sofa, which is also a hand-me-down from the Steenholdts’ grandmother.

Although it might seem odd to want to open your home up to strangers, Rachael and Mikala Steenholdt are happy to do it. “It’s nice to have somebody enjoy something that you’ve created,” Rachael Steenholdt said. In fact, she keeps everything set up for when guests book the space on short notice. “I always have it set up so all I have to do is grab my stuff,” she said.