After exploring the exterior of Aaron Karvonen’s home, let us take you on a tour of the interior. You won’t believe your eyes when you see the before photos of this transformation thanks to Refreshing Designs.

What do you get when you combine a home in need of an update, a young professional with exquisite taste and a team of talented interior designers? After exploring the exterior of Aaron Karvonen’s home, let us take you on a tour of the interior. You won’t believe your eyes when you see the before photos of this transformation. Almost four years ago to this day, Aaron Karvonen purchased his first place. Built in 1997, it was obvious that this home had a great floor plan and an even better location, situated right next to the golf course in Perham, MN. However, it was dying for cosmetic updates. Luckily, Karvonen knew that he could rely on the team at Refreshing Designs to help him transform his new abode into to a modern-contemporary pad that perfectly reflects his dramatic taste and practical personality.

A Set Of Fresh Eyes When remodeling any space, it is important to have a set of fresh eyes (or two) on your team. That is where Shayla Hunstad, ASID, and Bailee Schissel, ASID, came in. The two certified interior designers were responsible for communicating with Karvonen and ensuring that the home reflected his unique taste without being too over-the-top.

When Karvonen first purchased the home, it was full of ceramic tile, white carpet, honeyed oak and lots of brass, all of which which were hugely popular in the 1990s. “A contractor built this home for his family, and they only lived here for five years. There have been two other owners besides me, and the place had not been updated since it was built in 1997,” Karvonen explained.

Because Karvonen wanted the house to be included on a local home tour in the fall of 2013, his team had one summer to complete all of the cosmetic changes. This included new millwork, new flooring and a fresh coat of paint throughout the home, just to name a few upgrades. Because the original floor plan was already set up the way that Karvonen wanted, they only ended up tearing down one wall during the entire process. “With the ceiling lines and architecture of the home, we had to be careful with how we reworked the space,” said Schissel. “It’s fun to see how cosmetic changes can update an entire home,” Hunstad added. The foyer now features luxury vinyl flooring, which Karvonen, Shcissel and Hunstad used in multiple rooms throughout the home to give it a very cohesive feel. They also painted the ceiling white and added a contemporary railing surrounding the stairs. A new light fixture also increases the foyer’s modern appeal. Just off of the entryway is a large conversation room with an amazing view of the golf course. An arched doorway with columns separates this space from the foyer, but the painted ceiling continues into the conversation room. To help define this area, Karvonen, Shissel and Hunstad added molding to the columns and upgraded the fireplace by using contemporary tile. They decided not to add a mantle because the clean lines elongate the ceiling height and give the room a more modern feel. The kitchen is one of the spaces that required special attention from Karvonen, Schissel and Hunstad. Together, they reconfigured the layout to create a more open concept. Previously, the kitchen had an octagonal peninsula. Now, an appropriately-sized island allows Karvonen and his guests to move freely throughout the kitchen and dining areas. The kitchen is a perfect example of the color palette used throughout the home, which was inspired by Karvonen’s preference for hues of blue. The team at Refreshing Designs used various shades of blue, grey, and white with black accents throughout the home to create contrast and drama, all of which are visible in the unique penny backsplash. The backsplash is complemented by two-tone Caesarstone countertops and an accent tile above the range. Where there used to be an empty alcove in the dining area, Schissel and Hunstad created a functional built-in featuring a stacked, subway tile accent. The main floor guest bath previously featured an awkward layout in which the washer and dryer were located right next to the door, while the vanity and sink were tucked way back into the corner. Now, the stacked washer and dryer make the space more accessible for Karvonen’s guests. The master suite is Karvonen’s favorite retreat at the end of a busy day at work. Hunstad intentionally chose a darker paint color for a relaxing effect. Plus, the modern light fixture made out of recycled aluminum really pops against the dark blue backdrop.

One challenge this space presented was that there was little separation between the master bedroom and ensuite bath. Because the doorway between the two was rounded at the top, they couldn’t simply add a standard door. Instead, they had a set of custom barn doors made to make a statement and to function as a room divider. The ensuite is the only room in the entire house where Karvonen, Schissel and Hunstad had to remove a wall. Now, a frameless-glass-enclosed shower with contrasting tile and luxurious, freestanding tub add a touch of elegance to the master bath, while oversized tile underfoot sets a modern tone for the entirety of the space. Immediately off of the stairway, the lower level includes a large living room with a wet bar and walk-out access to the backyard. When searching for the perfect pieces for the lower level, Hunstad was careful to select furnishings and accessories that fit the scale of each room. “We do a lot of AutoCAD drawings, and ultimately I thought that a large sectional was the best option for this space,” she said. 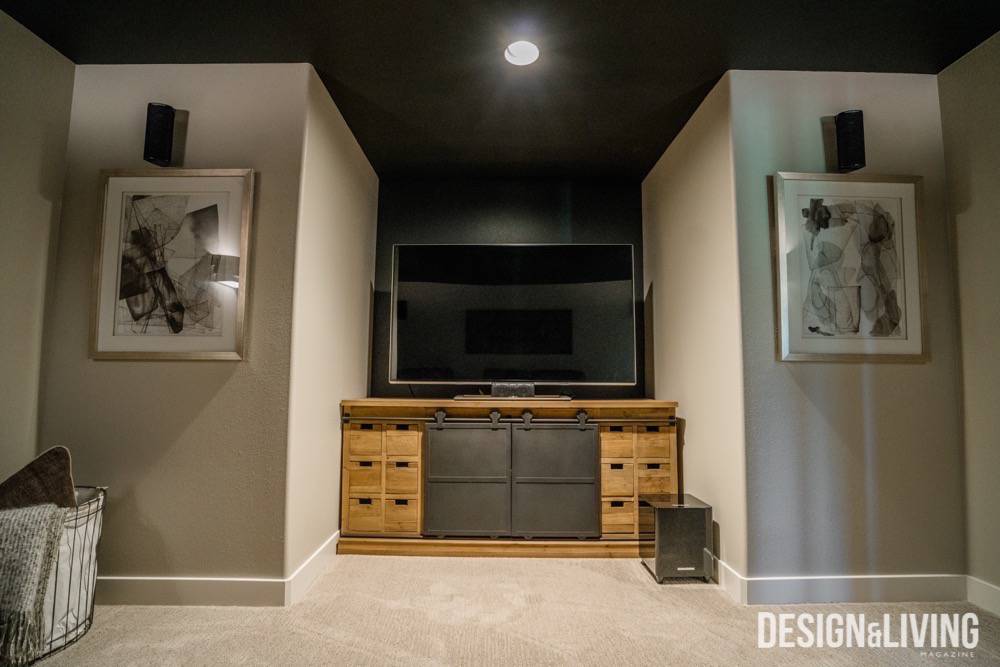 The theater room was already wired for an entertainment system when Karvonen purchased the home. However, Hunstad and the Refreshing Designs team are the ones who painted the ceiling and area behind the screen black. “We went back and forth about pulling the black paint color down onto that back wall and ultimately, we decided to do it because it made the space feel more like a theater, rather than just another room,” she explained. The lower level also includes two guest rooms, one of which features a dark and moody color palette with bright white linens. “When guests stay, this is definitely the first room that’s taken,” said Karvonen. Schissel also noted that they placed mirrors behind the bedside lamps to reflect light throughout the space. The finishes in the lower level guest bath are a continuation of those used on the main level, including the same luxury vinyl flooring. It also features contrasting tile in the shower, much like those seen in the ensuite master bath. Finally, the second guest bedroom features a light and airy theme, which is the inverse of the first guest bedroom. Both rooms had built-in vanities that were totally revamped with fresh paint and new countertops.