What do you picture when you think of city living? You’re probably imagining something very similar to the newly available units at Roberts Commons. Also known as RoCo, these apartments embody both luxury and affordability while enhancing Downtown Fargo. This month, we toured two staged units featuring fine finishes and locally sourced products with Kilbourne Group. Now, you can see what we saw there and experience RoCo for yourself. RoCo is made up of a seven-story parking garage that is wrapped by a mixed-use building. The garage is owned and operated by the City of Fargo and Interstate Parking, while the mixed-use building is developed by Kilbourne Group. In addition to 47,000 square feet of residential living in 72 apartment units, RoCo also brings over 13,000 square feet of commercial space for retail, as well as food and drink along Roberts Street, 2nd Avenue North and Roberts Alley.

Located on the corner of 2nd Avenue North and Roberts Street, RoCo was built upon what used to be a parking lot. However, the site had a rich history. It was once the home to the Columbia Hotel and later a Carnegie Library. Deb Wendel Daub, Senior Project Manager at Kilbourne Group said, “The Columbia Hotel opened on October 1, 1888 and featured 100 electric lighted, steam heated and superbly furnished rooms. Five years after opening, it was lost in the Great Fire of 1893.”

A Carnegie Library, one of many privately funded libraries built throughout the United States around the turn of the century, was then built atop the ruins in 1903 where it remained until 1964. When excavating the site, Kilbourne Group unearthed the foundations of these two historic landmarks. They opted to salvage the brick and incorporate it into the new building’s design. “When an old structure no longer supports its original purpose or a lot sits vacant, it takes thoughtful engagement to reveal its latent potential,” Wendel Daub explained.

The build was completed in two phases. The first phase started in June 2016 with the construction of the parking garage, which was completed by June 2017. Construction on the mixed-use building began in April 2017 and was recently completed.

RoCo offers 13 unique floor plans that range from 408 square feet to 1,117 square feet, including 24 studios, 36 one-bedroom and 12 two-bedroom apartments whose prices range from $680 to $1,925 a month on a 12-month lease. All units come with cable and internet included, while select units come with a balcony and a full-size washer and dryer. RoCo residents also use an app instead of a key to get in and out of their apartments and to access the secure entry points connected to the parking garage. “It’s an app called LATCH, which allows for keyless entry,” said Brian Carmona, a Leasing Agent with Centric Management.

This studio apartment is located on the 6th floor of RoCo. At 408 square feet, it is an ideal space for the Fargo minimalist who doesn’t want to compromise fine finishes. It features luxury vinyl flooring, custom, soft-close cabinetry, energy-efficient, stainless steel appliances, granite countertops and a custom penny backsplash. This 549-square-foot, one-bedroom apartment is located on the east side of the building, which has its own private entrance. Again, Kilbourne Group outfitted this unit with the same fine finishes we noted in the previous space. These finishes help to create a luxurious atmosphere where a parking lot previously stood. 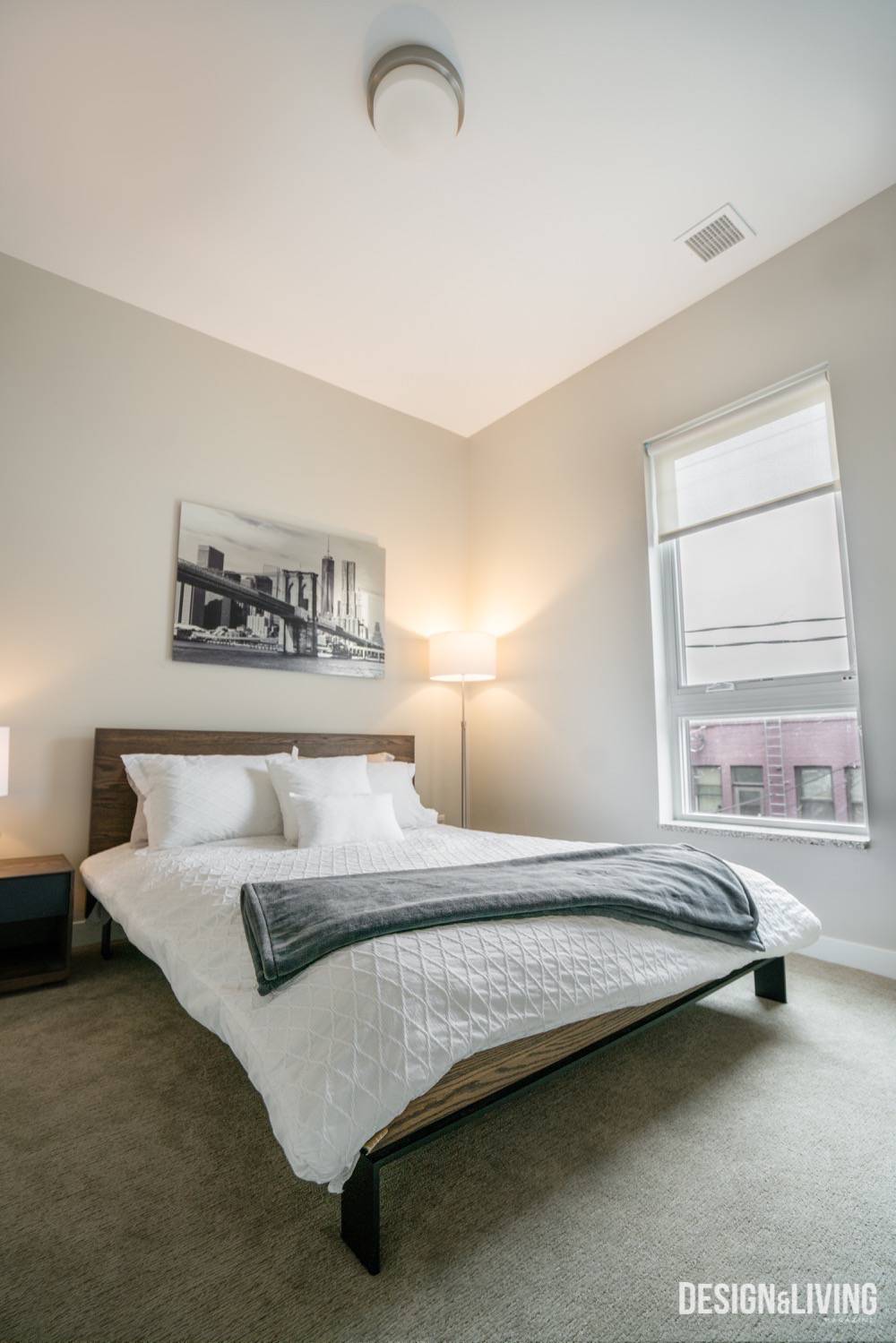